The past seven days have been particularly dynamic in the cryptocurrency industry as its total market capitalization soared by a considerable $70 billion. This happened on the back of major gains for most coins, with certain exceptions. Let’s dive in.

Kicking it off with Bitcoin, it’s up 3% in the past seven days, and it’s currently found at $21K. Throughout the majority of the week, BTC was trading in a downtrend, but a few hours ago, the bulls managed to pull themselves together and pushed BTC to a 5-day high above $21K. This happened on favorable jobs data released in the US.

It’s also interesting to note that a few days ago, Bitcoin’s whitepaper celebrated its 14th birthday – a major milestone, given that it had laid the foundations for what is currently a trillion-dollar market.

Elsewhere, altcoins clearly had it better than BTC. Bitcoin’s dominance – the metric that gauges its share relative to that of the rest of the market – is down 1% in the past week. And it’s easy to see why – Ethereum is up 7.4%, while BNB soared by a whopping 21%. MATIC is another top performer, and it’s up 23.3% in the past seven days.

Nevertheless, Dogecoin is where all eyes were in the past seven days. The meme coin soared by a total of around 60% during the week but went through a massive rollercoaster. At one point on Tuesday, the cryptocurrency was up about 130%, but it has been declining since. Today, reports came out that Elon Musk might table Twitter’s crypto plans, and DOGE took a beating.

On the flip side, the industry saw quite a bit of exploitation this week as well. Just today, we reported that a notorious hacking group stole $800K worth of Crypto Punks and other NFTs. The same group was responsible for another exploit earlier in October. Gala Games saw its token plunge by 90% after a massive number of tokens were minted. The company denied speculations of a hack, though. Yesterday, SKYWAYRD – the native token of Skyward Finance, also plunged by 95% after the protocol’s treasury lost a whopping $3 million in a smart contract exploit.

All in all, the week may have been good in terms of overall gains, but it also highlighted some of the critical vulnerabilities and pressure points of up-and-coming DeFi protocols. 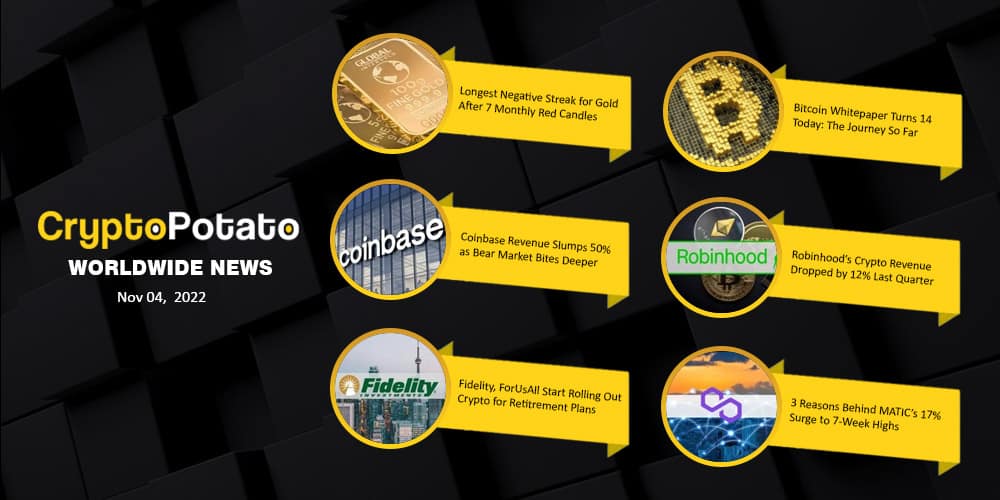 Longest Negative Streak for Gold After 7 Monthly Red Candles. Gold’s price has seen better days. The asset closed its seventh consecutive negative month in October, thus marking its longest losing streak. All this happens as inflation across the world is sky-high.

Bitcoin Whitepaper Turns 14 Today: The Journey So Far. This October marked 14 years since the Bitcoin whitepaper was officially released. Titled “Bitcoin: A Peer-to-Peer Electronic Cash System,” the document set the foundation for an entire industry presently worth trillions.

Coinbase Revenue Slumps 50% as Bear Market Bites Deeper. The bear market is having its toll on crypto businesses. Coinbase reported that its revenue plunged by around 50% from the previous year as trading activity dwindled.

Robinhood’s Crypto Revenue Dropped by 12% Last Quarter. The crypto revenue of the popular retail trading platform Robinhood is down 12% in the last quarter. However, the company’s overall trading volume increased by around 14% over the same period.

Fidelity, ForUsAll Start Rolling Out Crypto for Retirement Plans. One of the world’s largest asset managers – Fidelity – starts rolling out crypto for retirement plans. Another 401(k) provider based in San Francisco – ForUsAll, said that about 50 of its 550 clients have already started letting workers put their retirement savings in BTC and ETH.

3 Reasons Behind MATIC’s 17% Surge to 7-Week Highs. Polygon (MATIC) has been soaring lately. The main reason for that seems to be that Meta has announced that it will use Polygon for its digital collectibles. Also, JP Morgan tapped the network for DeFi trading.

This week we have a chart analysis of Ethereum, Ripple, Cardano, Dogecoin, and Shiba Inu – click here for the complete price analysis.