After dipping below the $20k range yesterday, Bitcoin regained support this Friday. On the other hand, Ethereum continues to outperform Bitcoin in terms of price action, as the cryptocurrency gained 4% in the past 24 hours, rising above the $1,600 level. The upcoming network merge for ETH is nearing and is the primary reason for Ethereum’s positive performance this week.

All eyes are on Ether this month as the upcoming network merge in several weeks will mark a significant milestone for the network. Ethereum will be the largest proof-of-stake network and create ample opportunity for traders to capitalize on a potential bull run that will likely ensue in Q4 2022.

Moreover, Ethereum’s market cap has been steadily rising while Bitcoin’s remains flat. A few weeks ago, Ether surpassed half of Bitcoin’s market cap. If Ethereum continues to outperform Bitcoin in price action, we could see ETHUSD overtake BTCUSD in market cap as early as next year. This would mark the first time Bitcoin would be dethroned in an event dubbed “The Flippening.”

This week’s big news regarding Bitcoin is Michael Saylor’s trouble with the government, as he’s being sued for tax fraud. Michael Saylor is one of Bitcoin’s most prominent proponents, and in addition to losing over $1.3 billion in value from this year’s Bitcoin crash, the tax fraud allegations aren’t helping his case in any way.

Saylor is having one of the worst years in 2022, but that doesn’t mean that he and his company, MicroStrategy, won’t recover from the calamities soon.

Looking at technical indicators like trading volume, Bitcoin and Ethereum are seeing little change in the 24-hour volume this Friday, suggesting that the market will continue to trade sideways throughout the weekend.

In addition, looking at alternative.me’s crypto fear and greed index, the current level is at 25, still in extreme fear but less drastic than yesterday, where it hit as low as 20. 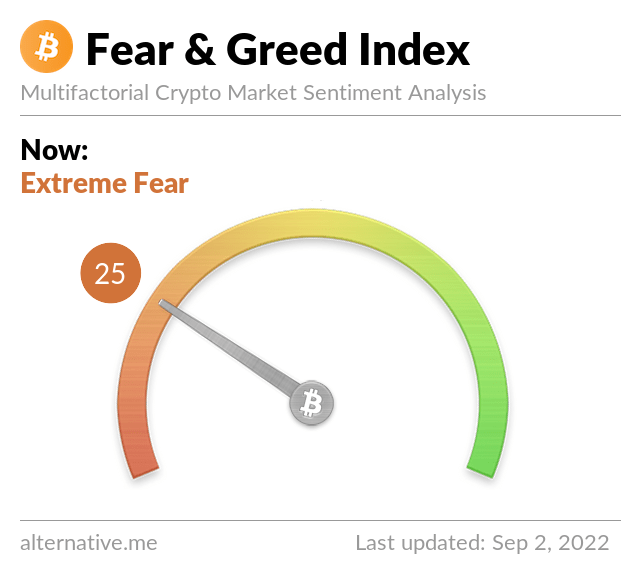 While the overall sentiment remains bearish, the downward pressure seems to have alleviated this Friday, and the markets will likely see little changes this weekend.

The global cryptocurrency market is also showing some bullish momentum, with its valuation inching closer to $1 trillion once again, currently at $988.58 billion, up 2.08% in the past 24 hours.

Disclosure: This is not trading or investment advice. Always do your research before buying any cryptocurrency or investing in any services.

Follow us on Twitter @themerklehash to stay updated with the latest Crypto, NFT, AI, Cybersecurity, and Metaverse news!

The post Ethereum Outperforms Bitcoin as ETH Rises Above $1,600 While BTC Remains at $20K appeared first on The Merkle News.