The world-famous cryptocurrency exchange platform FTX increased its revenue by more than 1,000% during 2021, from $89 million to $1020 million, according to company financial documents leaked to news outlet CNBC.

According to the documents, FTX’s net revenues during 2021 grew exponentially to more than $387 million. A significant increase compared to the $14 million it made in 2020.

The Crypto Winter is a Billion Dollars Opportunity

In 2022, the company has continued its hot streak despite the bear market that brought several cryptocurrency exchanges to shut down. During the first quarter of the year, it made over $270 million in profit and is on its path to accumulating over $1.1 Billion in revenue, according to sources cited by CNBC.

The mystery is: How did the company continue to obtain such good results despite the damages of the crypto-winter? CNBC reported that FTX did not want to answer this question. Sam Bankman-Fried, CEO and founder of the company, has already confirmed the figures. 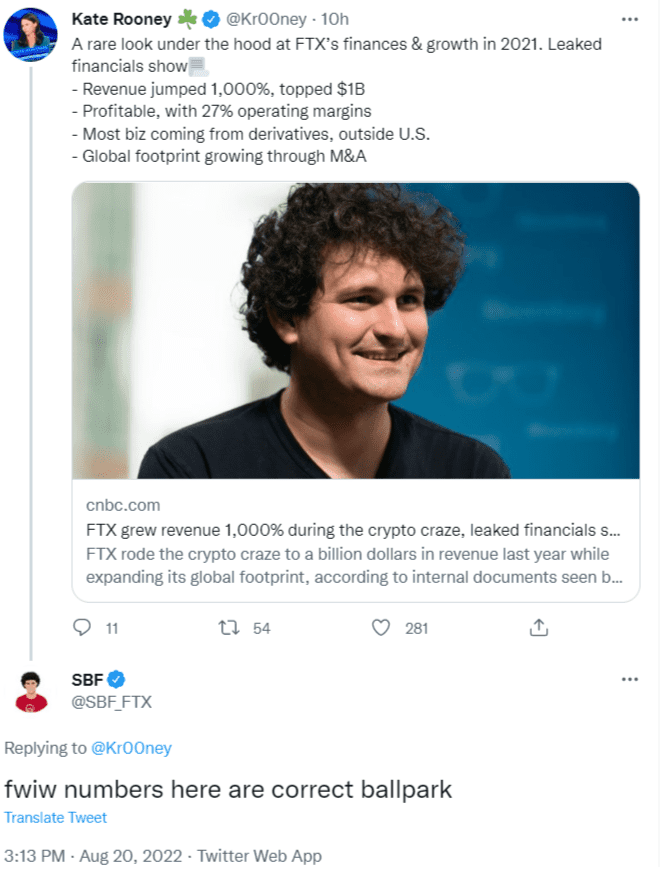 It is worth mentioning that FTX was founded 3 years ago and, in such a short time, has become a significant competitor to Binance and Coinbase, two exchanges that hold a large share of the cryptocurrency user base. However, unlike FTX, they are not doing so well during the crypto winter.

For example, during the first quarter of 2022, Coinbase reported a 64% decline in revenue from the previous quarter, representing a net loss of more than $1.1 billion. It even had to lay off an important part of its staff in a controversial decision widely discussed in all of crypto Twitter.

FTX is Building on Bearish Times

So far this year, FTX has acquired various companies, such as Bitvo, a Canadian trading platform, and Embed Financial Technologies, an equity clearing platform, to boost its growth in the market.

In July 2022, FTX offered to buy Voyager Digital, but the company refused. Its lawyers said the proposal was not really fair or beneficial to them.

“It was a very low offer disguised as a white knight’s ransom.”

Although Bankman-Fried has repeatedly talked about his intention to help other crypto startups, it is also true that his company has taken advantage of the current conditions to buy some troubled businesses.

Currently, FTX is discussing the purchase of Bithumb, a Korean cryptocurrency exchange, and reached an agreement with  BlockFi, to buy it for $240 million. It also tried to buy Celsius but backed out shortly after.

With all these bailouts and acquisitions on the table, it is hard to doubt SBF’s words. As Nathan Rothschild would say, The exchange is clearly buying on the sound of cannons. However, unlike the last part of the financial adagio, it has still not sold under the sound of the trumpets.